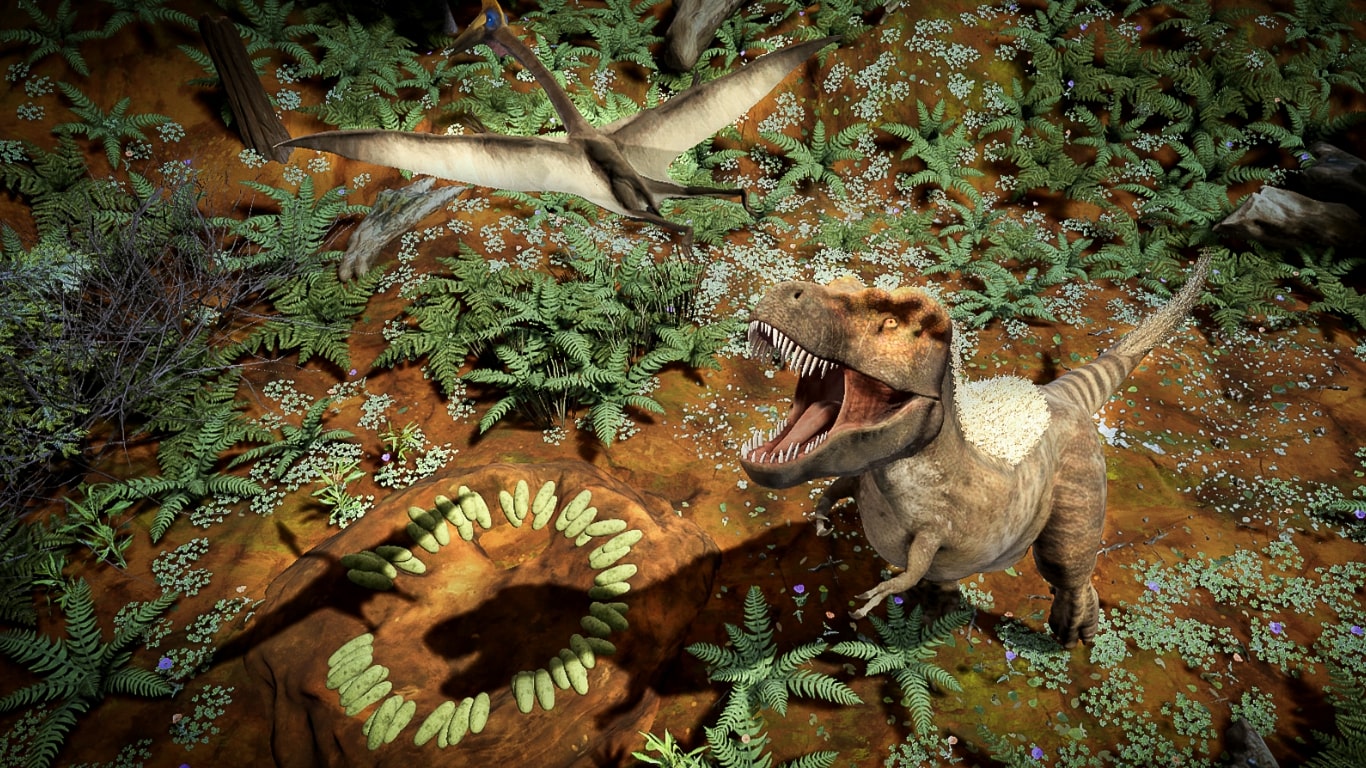 For museums across the world, interpreting complex research and new discoveries presents a constant challenge — requiring ingenuity, fresh thinking and an ability to distill highly academic material into compelling stories that educate and engage.

In achieving these aims, innovative and interactive technologies have a key role to play. Today, stories that were once conveyed on two-dimensional planes are finding new life through virtual reality. Not only can visitors look at exhibits, they can also become immersed in them —with platforms such as VIVEPORT allowing audiences to download experiences from their own home.

That ambition is at the heart of T. rex: Skeleton Crew — the first multi-player, interactive VR experience to be presented by the American Museum of Natural History. The experience forms part of T. rex: The Ultimate Predator, a major exhibition celebrating the institution’s 150th anniversary year, which explores the life and history of the group of dinosaurs known as tyrannosaurs highlighting recent discoveries, and placing particular emphasis on the famous T. rex.

“Together with HTC VIVE Arts we were able to work with the most cutting-edge technology available,” explains Vivian Trakinski, the Museum’s Director of Science Visualization, whose role is dedicated to developing ways to communicate science to the public. “Visitors get to assemble a T. rex skeleton — and, thanks to the magic of virtual reality, watch it come to life. They are then transported to the paleo environment, to Hells Creek Montana, where the T. rex roamed 66 million years ago.”

To create T. rex: Skeleton Crew, Trakinsi worked in close consultation with the museum’s palaeontologists, ensuring the finished experience reflected the very latest research. The VR skeleton was based on AMNH 5027 — a fossil excavated in 1907 in Montana by Museum palaeontologist Barnum Brown (a man often referred to as ‘Mr Bones’). Displayed at the Museum since its discovery, the specimen is remarkably complete, with a full skull and much of its back bone. 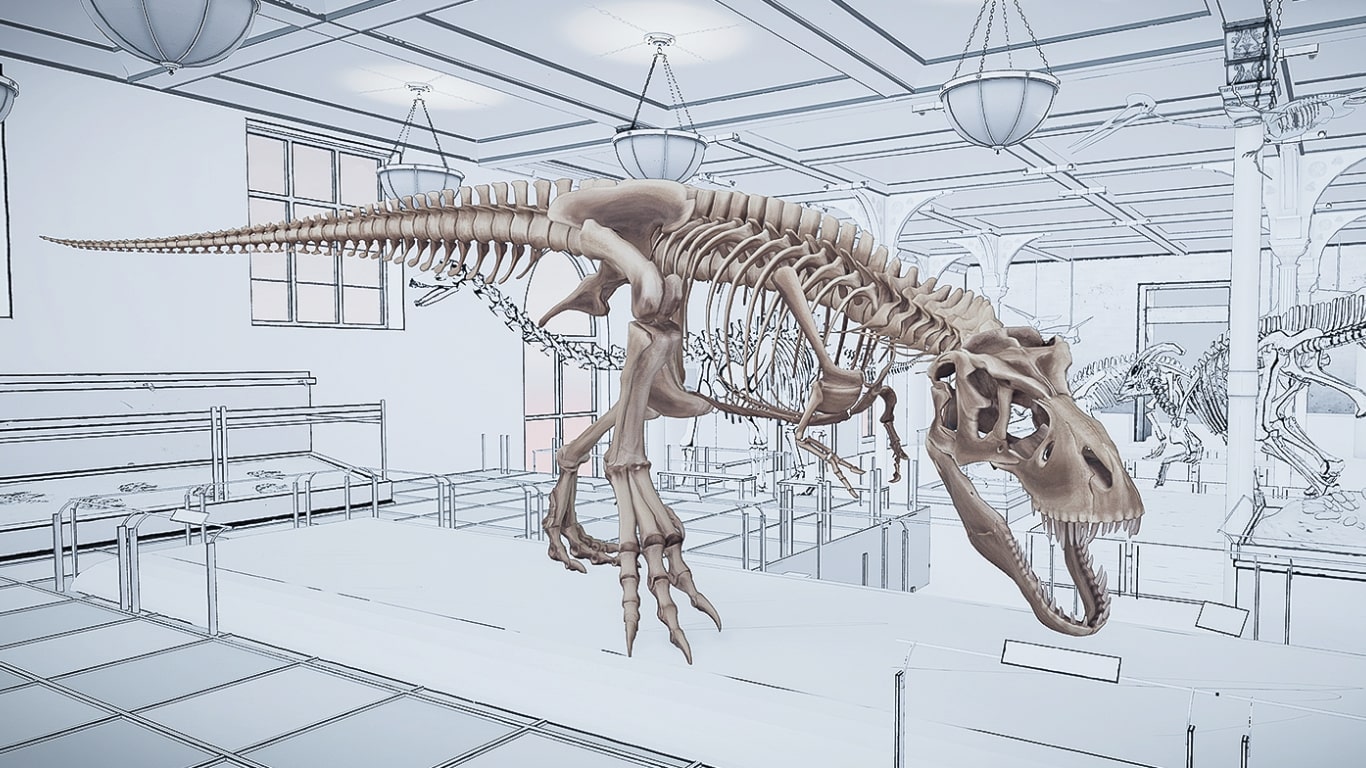 “One of the opportunities of virtual reality is to mix science and magic,” Trakinsi continues. “We worked with scientists to ensure the accuracy of the placement of bones, and to review the skeleton’s movements. There’s a whole field of biodynamics, where scientists use software models and comparisons with living species to understand how these animals may have moved”.

Further rounds of careful review followed: for the T. rex fossil to come to life, it had to have, not just bones, but skin and life-like features. Central to its development was Dr. Mark Norrell, the exhibition’s Curator, and one of the world’s most important living vertebrate palaeontologists. He explains that he worked with the team “from the outset”, ensuring that the experience “wasn’t just a game” but added to the “educational aspect of the exhibition”. 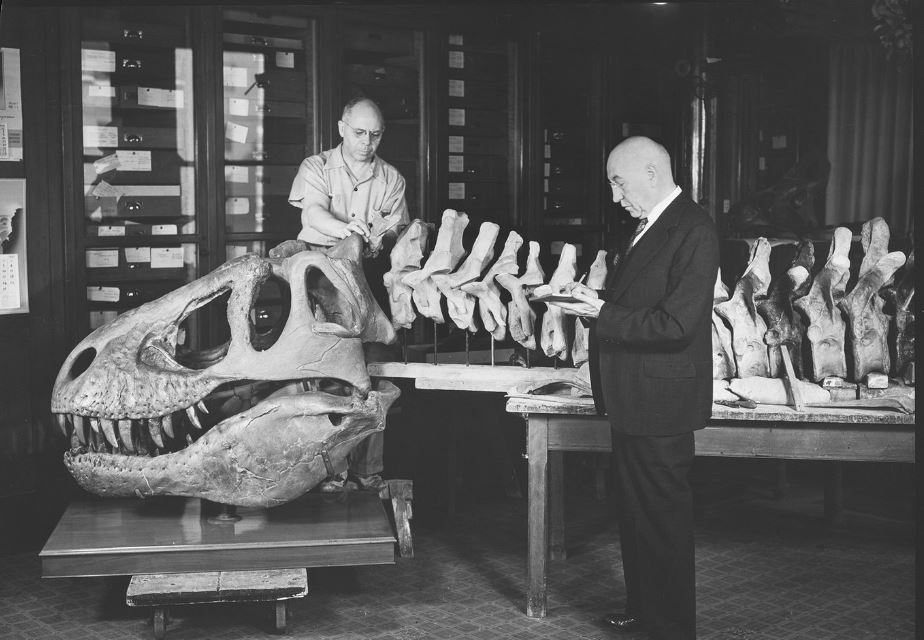 “There are great opportunities with VR,” says Norrell. “In this case, it takes us into the past and brings it alive”. For Norrell, the experience’s ability to transport viewers is a key part of its appeal: “I think VR gives visitors a better view of the T. rex. It’s hands-on, and it comes to life in the context of its environment”. Creators of T. rex: Skeleton Crew ensured that the dinosaur’s virtual landscape included plants native to the T. rex’s habitat.

Additional research incorporated into T. rex: Skeleton Crew might surprise viewers more familiar with Hollywood interpretations of the iconic dinosaur. “A lot of people may not expect to see that our T. rex has feathers,” Norrell continues. “While we’ve never found feathers with a T. rex, we’re reasonably sure they had them because we’ve found closely related animals in China that did.” Other discoveries include the ring formations in the dinosaur’s bones, which indicate its age.

“This experience brings the goals of science visualization to life as no other platform could,” concludes Trakinski, citing the unparalleled levels of immersion and interactivity VR offers one of the world’s preeminent cultural institutions. “Visitors are transported back in time, and really get a sense of the scale of the Tyrannosaurus rex, and what it would be like to come face-to-face with it. We’ve seen them duck and dive, and get so excited, especially in the paleo environment. That’s bringing science to life.”

Not in New York? An advantage of VR is that is allows audiences around the world to access. T. rex: Skeleton Crew, which is now available to download through VIVEPORT. This single-player home version expands upon the Museum experience, featuring an interactive and humorous tour from Dr. Mark Norrell, along with a wealth of new content including historic facts, archival videos, data visualizations and animations.