Director of Digital for Tate, Hilary Knight explains how virtual reality made it possible to revisit the studio of one of art history’s greatest names

How is Tate using technology to transform the way we experience art?
Our mission at Tate is to increase the public’s enjoyment, engagement with, and understanding of art. Access is at the heart of that mission, and we’re putting Tate’s Collection online, so that it can be viewed by people who can’t necessarily visit our galleries.We’re also creating content and experiences that encourage greater engagement with art, while providing insight into how we collect. Tate is international in focus, and we want to show art that is relevant to people from all over the world. But we’re also a national institution, with a collection that is for the UK – we want to show that it’s for everyone, and that everyone has the right to art.  As an organisation, we also have a responsibility to make sure we’re using technology, so that everyone can access our art – from the internet and social media, to VR.

Can you introduce Modigliani’s Ochre Atelier?
We were working on a significant exhibition of Modigliani’s works and wanted to integrate a digital experience that would provide visitors with a form of interpretation that was different to the texts on our gallery walls. We quickly chose virtual reality as a way of doing that, as it’s such a powerful, visceral way of communicating.

It was important for us that we fully embraced this technology, and that the experience was very much part of the exhibition. We worked closely with Preloaded, and initially thought of recreating a Parisian café which we knew the artist had frequented, to provide biographical context.

While planning the exhibition, however, the curator was introduced to a lady who owned Modigliani’s studio. We were given a unique opportunity to visit and knew that we wanted to create a personal experience. Visiting the studio of such a famous artist, so long after his death, was a rare privilege which we wanted to share with our visitors.

How did virtual reality transform visitors’ experience?
The experience makes it possible to spend a few minutes in Modigliani’s personal work space, which we reimagined through rigorous historical research. We read through letters from friends who visited the studio, people who had decorated it, and models who sat for him. We looked at sketches his partner Jeanne made while she was living there, to see what was in the background – things like his stove, which we created in VR.

At the same time, we researched Modigliani’s materials. A detailed technical study of one of his portraits revealed the chemical content of his paint, establishing that he bought ready-mixed colours, rather than grinding his own pigment – telling us about the materials he would have had in his space.

Other artworks told us where he bought his canvases and stretchers, and we used Google maps to find the shop, which was just three minutes from his studio. While none of his paint tubes survive, it’s extremely likely that this is also where he bought his paint and brushes. We have brushes in our Tate Archive, which we were able to scan and recreate in VR.

We looked at the background of things he painted at the time and know from first-hand accounts that he repainted the walls of his studio in patches to correspond with these colours. While the extent of our research isn’t immediately apparent, it does mean that the experience stands up to academic scrutiny and can be trusted as a source of genuine insight.

What was your favourite thing about the project?
The research was really special – it felt like detective work. But I was also delighted to attend the exhibition opening and see the response of the people who had loaned some of the works – an elderly couple who had lived with the art, experiencing Modigliani’s studio in VR.

We put a lot of work into making an experience that was as frictionless as possible. When visitors took off their headsets, they were delighted and moved – and, crucially, felt that they had learned something. Witnessing the joy that the Ochre Atelier brought people, both young and old, remains one of my favourite things about the project. 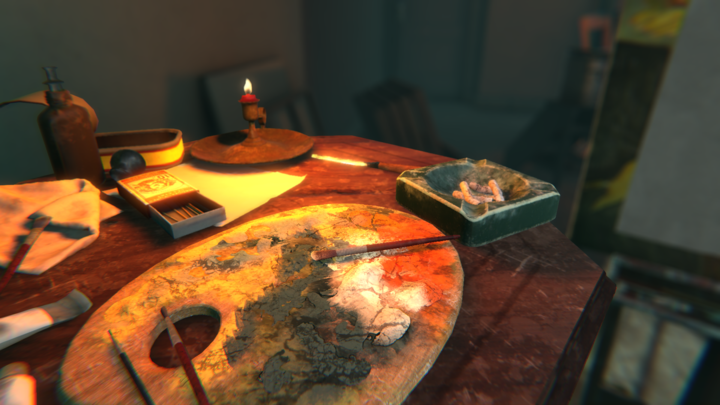 What’s the future for Virtual Reality in museums like Tate?
I think we’ve demonstrated that there a place for virtual reality in the gallery, as a way of helping people to connect on an emotional level – understanding art through feeling, as well as learning facts. I think there is something interesting about using VR to take people to places they couldn’t otherwise access, and it’s also something that an increasing number of artists are exploring.